Turtles all the way down to Karadorum 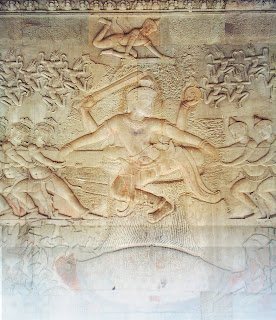 I have a doctor's appointment tomorrow for this cough that won't go away. I think I would have recovered from it by now if I was able to sleep better. I am still having to take something to get to sleep. It's been 2 or 3 months of this.

I'd been eying the rings in the Macy's catalogs, especially the blue ones, so a couple weeks ago I did some in-store research. I found a lovely blue topaz ring, and upon further inquiry, discovered it was going on sale the following week. I rationalize that I could buy it as a Christmas present for myself, something pretty for getting through a year that was not so pretty. I returned the day before Thanksgiving and got it for 40% plus 20% off. (Very clever of them, since this is not 60% off because the 20% is taken off the price after the 40% discount. So it was actually 52% off. Yes, I am an accountant.)

This was the high-point of my day, as it was the day before Thanksgiving and the day before that I had a total meltdown at my therapist's office. It was about Thanksgiving, missing my brother, and feeling guilty because I was alive and he wasn't. I got so upset that my therapist was trying everything to get me to feel better. She finally said something about how there was a light inside both of us that helped us survive, and his went out but that doesn't mean mine should go out too. In fact, I should keep mine going to keep his memory alive. It sounds corny, but it kind of calmed me down. She keeps talking about how I am in a box, a box of coping skills that protected me from going crazy as a kid, but traps me in the trauma as an adult. My brother was also in a box, and the only way he knew out was death.

Even though she calmed me down enough for me to walk out of there, I couldn't stop crying. I can't even think about my brother without crying, and I made my way back to my car, through the Borders and down the elevator to the parking below, sniffling and tearing up. I pretty much cried the rest of the night. After that I just felt numb all over. When I get like that, I feel slightly shifted out of my body, like a puzzle piece that's not quite snapped into place. I also feel frozen and speechless. Yes, I can talk, but something is not working. My thoughts are not coherent, not in language form. I can talk about non-traumatic things, but I can't put words, either verbal or written, to how I'm feeling. It's like a swirling, wordless mass. It hurts, it aches, it feels heavy and suffocating. It pushes on my brain, sits on my chest, and hangs from my arms and legs, but it just won't form into concrete little chunks of words so I can package it up and release it. It's like drowning and trying to push the water away with your hands.

Now I understand why sometimes I just can't talk to people, sometimes I have to hide, even from people who care about me, because I am struggling to reach the surface and you can't talk when you're underwater or your mouth fills with water and you choke. Sometimes I can't write, or even tweet or Facebook. The words just won't come. I have to force them, and it hurts to do. I read something about Stephen King that said he witnessed a friend get hit by a train and killed when he was a kid. He came home speechless and in shock, and still has no memory of it. Scared speechless. It's something that happens in the brain, a part of the brain that shuts down during trauma. Because of the PTSD, my brain continues to function as if I am still in danger. When the lower level of trauma I am always living with is heightened by something (like the holidays), the trauma symptoms increase, and parts of me start shutting down because it's too much to psychologically deal with. It feels numb, mute, frozen, blank, aching, dull. Dumb.

I brought the magically beautiful ring back to Macy's today to have it sized. They have to send it away, and I was shocked to find out that I won't get it back for 3 weeks! Now I am pissed at myself for not taking a picture of it. I miss it's clear blue glimmer so much already. I guess that will make it an appropriate Christmas present, though. I won't be able to wear it until then.

I also brought with me a turtle ring that I got in San Francisco. It slips around on my finger so I haven't been able to wear it. There is a jewelry store in the mall that sizes rings (quicker, presumably). They actually put a metal spacer in the band to keep it in place instead of changing the size. When I put it on, the man told me to turn it around so the turtle faced me, "butt out" as it said. He told me turtles were good luck, but that if you angled them away from you, they and the luck walked away. He pointed up to a turtle figurine on a high shelf in the store who was faced towards the wall.

It made me think of why I bought the ring in the first place, besides that I love animals, it's pretty and sparkly, and the legs, head, and tail jiggle. I thought the turtle was like me hiding my emotions to protect myself, but wanting to stick my head and legs out so I could see the world and walk around and explore. I'm soft under my shell though, so I am easily hurt when I put myself out there. Today I thought about that box my therapist talks about, and how it's more like a turtle shell. My therapist told me that the work we're doing is not to tear down my defenses. Deep inside my brain I know that these defenses kept me alive, and I'm not going to let go of something that I feel is necessary for my survival. That will just traumatize me further. No, we are slowly poking holes in the box so I can escape it. But maybe a better metaphor is a turtle shell that I can transform. The turtle shell does protect me, but in order for it to work I have to hide in it. I can't see, move, or interact with anyone. When I do come out, I'm more vulnerable than someone who learned to protect themselves in a supportive environment with predictable, loving parents, someone who can interact with other people but still set boundaries and limits that keep them from getting hurt too often or too badly. (That boundaries thing really eludes me.) 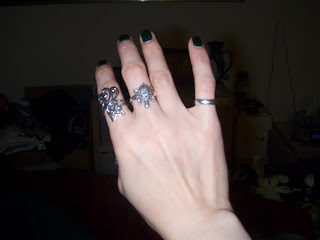 What I'd like to do is to morph my shell into armor. It would be flexible; I could breathe, talk, see, and interact with my environment but still defend myself. I could feel reasonably safe walking around in the world, rather than exposed and helpless. Security and freedom, together at last.

I tried to take a picture of my turtle ring, but I had a hard time focusing on it. So this is the best I could do. Lucky turtle power!
Posted by Tealrat at 9:01 PM

Since I can remember, I've gotten a cough in between fall and winter. It usually lasts a couple months. My mom apparently took me to the doc once as a kid, and nothing was wrong--it's just the way my lungs get used to the change.

Your therapist sounds perfect. And I do agree with her/him completely.

I love reading your blog; you write so well. Thank you!

Thanks! I hate it when I feel like I can't write. It feels so weird.

My therapist IS perfect! She just told me her dissertation was on why people who were abused as kids end up in abusive relationships as adults. She is so perfect for me.

Turns out I have a sinus infection! Boo.

I agree 100% with AixelA...
you are a great writer and because of the way you write things and the way you see things it causes me to have breakthroughs in my own healing. Thank you. And thank you to your therapist too.