Hockey = awesome, except when it means antibiotics overdose 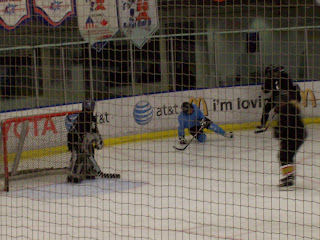 It seems pretty likely that I got so sick the other day because I played a hockey game after taking my first dose of antibiotics. With the first dose, you take 2 pills, and playing right after that was probably kind of stupid. By right after, I mean 6 hours, but still. That is the primary reason why I am avoiding getting on anti-anxiety medicine. It might help my stress levels go down, but at the same time, I am very sensitive to medication, get sick to my stomach and migraines easily, and I really get that rush of overprocessing medication when I exercise. Plus, I think hockey works better to reduce my stress anyway.

So I have a game tonight (in 2 hours, 4 hours from my last dose) and I'm really torn about playing. I don't want to screw up the medication so my sinus infection isn't effectively combated, and I don't want to get sick again, but at least I didn't have to take 2 pills this time, and maybe my body is used to it enough that I won't react like that again. Sounds like I'm making excuses. I suggested to one friend that I could take it easy, and he said, "Take it easy in hockey??? You can't do that!" He's right about that. Another friend suggested I could play wing instead of center. I didn't really like that suggestion because I like playing center. At the same time, center is a lot of skating (making it totally impossible to "take it easy") and I'm not very good at it. I am fairly decent at getting back on defense (as the center has to help out the D in your own zone) and backchecking (requiring the really intense skating because you're usually chasing someone down). But offense I'm not so great at, which is kind of important. I have a hard time bringing the puck up because I don't control it very well, and I have a tendency to let passes bounce off my stick so I lose the puck. I was pretty good at passing the puck to the center, but of course that is of little use when you ARE the center. Damn.

I just started playing center this season because my Friday night women's team- the Fighting Blue Smurf Lady Kings! lost our star center and we need at least 2 centers. I often play center on my men's team because I just get put there. I hear the occasional guy on my team gripping under their breath about me being at center (yeah, I have ears, smart guy), to which I say-

1. It's not my decision. The team captain decides where people play, and he seems to like putting me there.

2. At least I get back on defense. That seems to be a problem on our team, that the offense doesn't help the defense out. I do.

4. At least I'm trying to get better, instead of just bitching. Anyone who thinks women are a bunch of drama should compare the level of drama in my women's leagues to the men's. Men are not less drama. You think the NHL is not a bunch of drama?

Look who's bitching now. I'm venting, though. :) It's been frustrating to be sick for so long, because I know I'm not 100% and that drives me crazy. I certainly don't want to be coddled, but it has not been fun for me to be suffering through not being able to breathe through my nose, having miserable lung capacity, and coughing almost to the point of throwing up on the bench. Plus getting sick from the antibiotics. So I'm just going to whine about it on my blog, since I can't at games. Waaaa, poor me!

Okay, I feel better now. Three guesses as to whether I play tonight, and the first 2 don't count!
Posted by Tealrat at 5:55 PM

She must be talking about me!

You weren't even at the game on Wed! So obviously, not you. Although it might be worth noting that I would like to be treated like a teammate, and not the team charity case. I'm not that bad.

also, did you ever check out those DVDs? What did you think? (don't name them)

Nice dispatch and this enter helped me alot in my college assignement. Gratefulness you for your information.