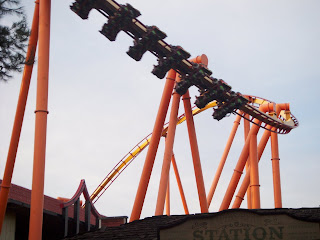 Okay, I am not tolerating the antibiotics well. Last night I woke up with stomach cramps and a migraine. I tried to walk it off (around my apartment), but by the time I had to get up for work I could barely move. It hurt to even turn my head. I called in sick of course, and pretty much stayed in the same position in bed until 1 pm. I did manage to eat something so I could take some pain killers, and went to therapy. I still have the migraine and a stomachache, AND my ears hurt. Sometimes the cure hurts more than the sickness...

Therapy was good. My therapist really wanted to tell me how interesting I am because I don't have borderline personality disorder. She said in the field of psychology there is something of a debate as to whether severe child abuse almost always leads to this disorder. Borderline is very hard to treat and has a poor prognosis, primarily because it is characterized by an unstable and highly disturbed sense of self. Therapy is difficult with someone who's identity is constantly shifting, like building a house on sand. (I learned that from my undergrad psych classes.) So she said I was unusual in how I had the background for borderline but psychologically did not deal with my situation in that way. It was kind of funny the way she said it, like I was a particularly fascinating experimental subject. That sounds bad, but she didn't say it in a dehumanizing way. I was actually very flattered. I remember when I learned about borderline personality disorder it made me a little nervous, because they do make it sound like child abuse just automatically leads to a personality disorder of one kind or another. We talked about the turtle metaphor, which she was all over. She thought it was a fitting improvement to the box metaphor.

Therapy has really helped me come to terms with how the combination of physical, verbal, emotional, and sexual abuse, and neglect I went through really was quite severe, and that I did an amazing job of living through it with my personality and psychology intact. My shell had to be thick and strong, and the way I dealt with it really did allow the core of myself to go undamaged. I am a highly functioning adult considering how disturbed my upbringing was. All I have to do is look at the history of abuse and mental illness (including alcoholism and suicide) in my family to see that I fared pretty well. It feels good to know that in some ways I really bucked the system. I was meant for something much worse. I can build on my turtle shell much easier than on sand.
Posted by Tealrat at 8:43 PM

I dont know wat exactly happened with you but all I could speculate is that u r a brave girl. I am all in awe and respect for people who overcome their odds n ordeals with great fortitude and optimism..